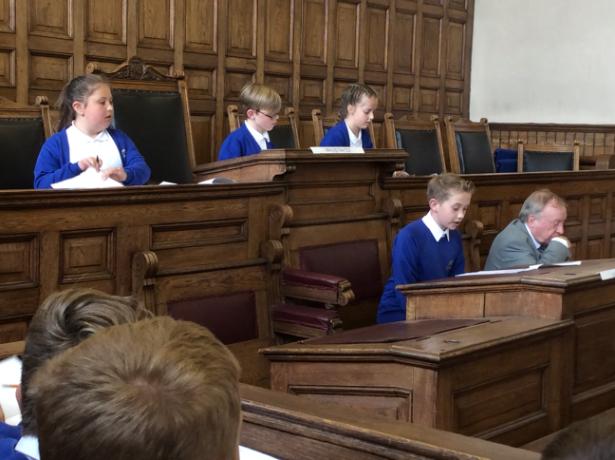 All maintained schools are required to promote the spiritual, moral, social and cultural development of their pupils and through this the five British Values:

At Roberttown School one of our school aims states:

‘As our children grow we encourage them to develop emotionally, socially and spiritually so that they become confident and fulfilled young people. We help them to develop skills, confidence and independence so that they can make healthy and responsible choices and contribute positively to the local, wider and global community.’

Pupils at Roberttown learn about and are actively involved in the British Values in the following ways:

We have a number of pupil groups within school, School Council, Eco Council where the pupils can choose to stand for election and the pupils vote for their representatives. The groups meet regularly and make decisions on a range of school issues including organising raising money for charity.

In May 2015, in the run up to the General Election, we held our own hustings and election and the pupils voted for the which ‘Green Day’ they wanted. The winning party then organised our ‘Green’ theme day which was held later in the term.

The pupils gave these views on what democracy is:

‘..having the right to vote for who you like…’

‘voting for what you want to happen in our country…’

‘If you’re having a vote you have got democracy because you are deciding on something…..’

The Rule of Law

Our school values are reflected in our CARE code- Consideration, Affection, Respect for Everyone and Everything. Pupils are taught about our school values from the time they join Roberttown. They learn about the code, the values it represents, the rewards of upholding these values and the consequences when the CARE code is not followed.

At the beginning of each new year classes draw up their own class code with their teacher and decide the values and rules that they will have in their own class.

There are many opportunities for rewards through Treasure and table points, stickers from the lunchtime supervisors, rainbow and pot of gold stickers and golden time. Our Celebration Collective Worship each week celebrates positive behaviour and attitudes both in class and at playtime and lunchtime.

Through their time at Roberttown pupils are encouraged to make choices, voicing opinions and listening to others, all within a supportive environment. Our work in Collective Worship and PSHCE provides opportunities to explore and learn about a range of issues, discussing a range of opinions and making considered decisions.

Respect is one of the values of our CARE Code and is at the heart of our work as a school. We aim to be an inclusive school where all feel valued and contribute. Our pupils are treated with respect and learn to treat themselves and others with respect both within school and when representing school in the wider community.

The pupils told us this about mutual respect:

‘ ….is where you respect someone else’s opinion even if you don’t agree on it..’

‘.. having respect for different countries and beliefs……’

We are a church school which, as our school aims state, ‘welcomes and accepts all individuals, developing positive attitudes, tolerance and forgiveness.’

Our curriculum is carefully planned to ensure that our pupils learn about a wide range of faiths and beliefs. We have close links with our local church, All Saints’ and also, through our twinning work, with Hyrstmount Junior School in Batley. During their time at Roberttown our pupils visit a range of places of worship and learn from a number of visitors to our school. These enable us to help our pupils to be welcoming, understanding and accepting of others.