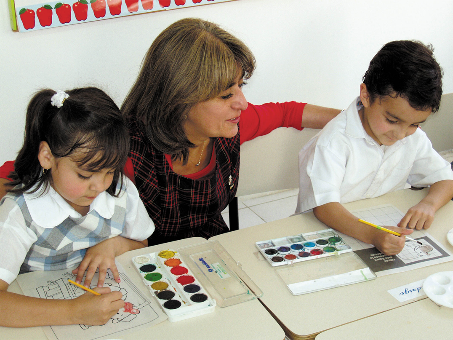 All schools are required to have a Governing Body which usually comprises of the Head Teacher and staff, parent, Local Authority and Community representatives. As we are a Church of England school we also have Foundation Governors, appointed by the church and local diocese. All governors are volunteers and commit their time to help the school improve and develop.

Our full Governing Body is made up of thirteen members and meets each half term. It comprises:

Two Parent governors - these governors have children at the school now or have had in the past and have been elected by the parents of the children attending the school. They serve for a period of four years.

One Local Authority representative- these governors are appointed by Kirklees Council. They serve for a period of four years.

One Staff governor- these members are elected by the school staff. They serve for a period of four years.

Three Foundation governors- these members are appointed by the church and the local diocese and have special responsibilities for sustaining and developing the school's Christian character. They serve for a period of four years.

There may also be Associate Governors. These are non elected members who have been invited on by the Governing Body because they have a particular expertise or interest.

The Governing Body undertakes a regular skills audit to ensure that they have the appropriate skills to carry out their role.

A large part of the work of the Governing Body is delegated to our two main committees:

These committees meet each term and report back to the full Governing Body.

The minutes of our meetings are available on the school website and also on display in the school entrance hall.

If you want to know a little more about the members of the Governing Body please read the Governor Profiles on the website.

Please see the documents below for additional information and our Governing Body Business Interests.

A Day in the Life of the Chair of Governors

A Day in the Life of a School Governor

The Governing Body undertake a series of visits during the year. The visits are part of their monitoring role and help the Governors to find out more about the work of the school through talking to children, talking to staff and spending time in classrooms.

Please view their reports below:

Margaret joined the Governing Body in 2012 and is a Foundation Governor. She became our Chair in July 2015. She is a member of the Church Parish Council and is the Safeguarding Officer at All Saints Church, Roberttown. She is also training to be a Reader in church and leads self help groups for a mental health charity. She tries to keep busy since she retired as a Social Worker, working with Children and Families within Kirklees. Her two sons are grown up with children of their own so she takes interest in her grandchildren’s schools. When she has time from helping in the Church, she enjoys reading, baking and knitting.

As the Head Teacher of Roberttown CE (VC) J&I School Samantha is a member of the Governing Body. She became a governor in 1998 when she joined the school as Deputy Head Teacher. Being a member of the Governing Body gives her the chance to meet with all the governors on a regular basis and work with them to make our school even better. In her spare time she enjoys spending time with her family, playing the piano, reading and visiting the theatre and cinema.

Louise is the Deputy Headteacher and a classteacher. She has been involved in Governing Body meetings since her appointment in April 2001. either as a Staff Governor or as an observer. This gives her the opportunity to support the Headteacher with the continual development of the school and keep up to date with Governing Body issues. Louise has a 12 year old daughter and she keeps her fairly busy with dancing and gymnastics. In her spare time Louise enjoys being in the outdoors, caravanning, walking her dog- Max and relaxing with friends.

Suzanne has been a support staff governor since 2010 and has served on the Standards Committee. She has recently moved onto the Resources Committee. She works as an HLTA in school and leads School Council. Previously, Suzanne worked in IT Training and has been at Roberttown School for over 8 years. Suzanne has one child who attends a secondary school within the local authority. She enjoys hill walking, running and has completed the Leeds 10K.

Caroline joined the Governing Body in July 2018.  She is married to Wayne and has two young sons, one in year five and the other in the reception class at Roberttown School, she also  has two older step daughters.  Caroline has held a career in Marketing, in senior level positions for over 20 years.  Most notably as Senior Director for Symantec/Norton, the internet security company and most recently for an IT company in Huddersfield as she moved to work more locally as her family grew in recent years.  Caroline brings to the governing body her time, enthusiasm and business experience to help collectively support the school and its pupils achieve ongoing success.

Jonathan is a Parent Governor and is step parent to a child who is currently in Year 4.  He also has another young child who is aged 3.  Jonathan has been a teacher for the past 17 years and has been a Deputy Head for the past 6 years at a school in Cleckheaton.  During the past 6 years he has also served on his own school’s Governing Body.  He is the Chair of the Standards and Effectiveness Committee. Jonathan enjoys spending time at the weekend with his family visiting a variety of local attractions, often these include trains which his son is particularly fond of.

Helen is a co-opted governor who joined the governing body in 2013, after moving into the village in 2012. She has two young sons and two stepdaughters. Helen is a specialist dyslexia assessor, consultant and trainer. Helen is chair of West Yorkshire PATOSS, which is the regional association of SpLD teachers and assessors. Under this role she organises SEND CPD and conferences for educators and families. Helen serves on the Standards and Effectiveness Committee, the Pupil Discipline Committee and is the named Governor for Special Educational Needs and Inclusion.

Liz is an Early Years Professional (Early Years Teacher) and is a member of the Chartered College of Teaching. She has been the leader of a local pre-school for over 20 years and has a background in banking.  She is on the Standards and Effectiveness Committee, is a member of the Appraisals Committee and is the named governor for Early Years. Her spare time is spent relaxing with family, reading and walking the family dog.

By way of introductions I am an Associate Priest serving Roberttown, Hartshead and Scholes for the last five years. Before becoming a priest I worked as a schoolteacher in Leeds for thirty five years, first in middle schools as a class teacher then subject leader then moving to high school as a head of year. I have a Masters Degree in educational management and a BA in Theological Studies. I am married and have two grown up daughters.  I enjoy walking and together with my wife have completed the Calderdale Way, The Cleveland Way, and the Dales High Way. My other main interest is music. I play piano and guitar and have led the Roberttown Pop Choir for the last five years.

One of my areas of interest is well being and mindfulness and how children can be helped to cope and thrive with the pressures and pace of life both in and out of school.

Cathy is a foundation governor, joining the governing body in 2019. She is a regular parishioner at All Saints with her family.  Cathy has lived in Liversedge for all of her life, attended Norristhorpe J&I School and Heckmondwike Grammar School.   She studied for her degree in Psychology at York University and her Masters in Marketing at Huddersfield.  Cathy is the Business Manager at Kirklees & Calderdale SCITT (Teacher Training), her career covers lots of business operational roles in public sector.  Cathy serves on the Resources Committee.

Andrew has been a governor at the school since 2005, firstly as a Parent Governor and then as Community and now Co-opted Governor. A resident of Cleckheaton, he is a director of his own business which helps older people move home. He is Chair of the Resources Committee, a member of the Appraisal Committee and is currently governor with special responsibility for the areas of Safeguarding and Health and Safety.

What Is A Governor?

School governors are one of the largest volunteer groups in the country. Most schools work with a group of school governors - together they’re called the 'governing body'. Governors provide strategic leadership and accountability in school. They’re involved in decisions about all aspects of managing the school – such as running buildings and budgets, supporting staff and setting standards of school discipline.

The role of the governing body is strategic. Governing Bodies:

What does the role involve?

Most governing bodies meet each half term. Governors are also be expected to join one or two sub-committees – these are responsible for areas such as health and safety, the curriculum, finance or buildings. You’ll need to be able to work well in a team, as you’ll be making joint decisions on policy.

As a governor you’ll probably need to commit ten to fifteen hours per term. However this can vary, depending on any issues the school is working on at the time. The role of the governor will be more demanding if the school is going through a significant change such as appointing a new head teacher, or joining with another school.

Who can be a School Governor?

Almost anyone over 18 can become a governor – you don’t have to be a parent with a child at the school.

The most important qualities for being a governor are enthusiasm, commitment and an interest in education. You don’t need teaching experience, but it’s useful to bring skills from other areas of your life.

If you are interested in becoming a governor, please click the link below for further information from Kirklees.

When there’s a vacancy for a parent governor all parents will be informed, and you’ll have a chance to stand for election.